In many facets of the shooting sports these days, it would seem in some ways we may be overly restricted, but in others, we are almost spoiled for choice.  One area of growth would be the variation of target designs and systems to add value and enjoyment to the sport.

The history of targets over the ages is quite fascinating, with everything from old European ornate painted target scenes to live pigeon shooting in the 1900 Paris Olympic Games. However, as a young shooter in the 1980s and 1995, it seemed plain old paper targets – be they bullseye- style or animal silhouettes – were about the only option for me. But all that has changed. Gone are the days when I would split Mum’s wooden pegs into two pieces and stick them in the ground upright to act as cannon fodder to my air rifle. Today, most gun shops will have a variety of target designs and systems to suit every need. GlowShot in Victoria offers a range of products from traditional-style paper targets with a twist, to fun reactive target systems. The company recently sent some products for review and there were some enjoyable highlights. 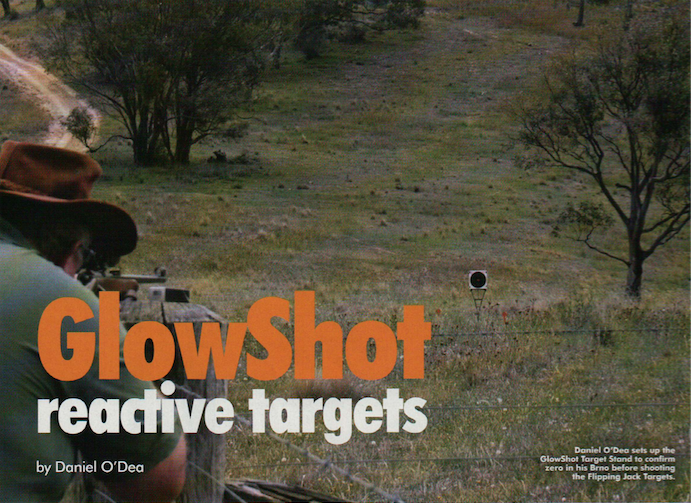 First, let’s cover the paper targets. Most paper targets might be black on white or other contrasting colours. GlowShot’s, however, called Multi Color Reactive Splatter Targets, are black with brightly coloured fluorescent scoring rings. The rings are individually coloured and glow under the black scoring zones, so, when shot, a bright halo appears of the same colour around the hit. This gives a highly visible strike indication that instantly stands out against the background and can be clearly seen at distances that would usually have you reaching for the binoculars. The Splatter Targets come in sizes from 6 to 16″ (152 to 406mm). The targets are made in the United States, which explains the imperial measurements. Targets supplied came in round targets measuring 6, 8 and 10″ in diameter (152, 203 and 254mm), and oval targets measuring 16×10″ (406x254mm) and 11×7″ (279x178mm) wide. All carried a bright fluoro orange centre bullseye measuring 0.75″ (19mm) across. A strike within this centre remains orange. On the round targets, the first inner ring is 1″ (25mm) from centre or 2″ (50mm) across. A strike within this area halos in white. The next ring is 2″ (50mm) from centre for a 4″ (100mm) spread. Depending on the size, this trend continues in either 0.5 or 1″ increments to the outer ring that matches the overall size. Colours vary, but generally, whatever the ring colour is, the area within registers the same colour when hit. The oval targets differ, in that the horizontal increments are at 1″ (25mm), but the vertical increments are at 1.5″ (38mm).

All target sizes come in either heavy card or adhesive versions. The heavy card units are, as suggested, a heavy gauge paper or card and require affixing to a target backing. The adhesive targets are in effect stickers that are peeled off and stuck on the backing, whatever that may be. As a bonus, the adhesive targets come with additional patches that peel off the main surround and can be used either as patches or additional aiming points on the backing. All targets came in plastic-wrapped packets of either 25 or 50, depending on size.

I tried the target in various applications over a period of time. That meant everything from long strings of handgun fire at close range to sighting-in rifles out to 200m.  At closer ranges. the reactive nature of the targets makes spotting your shots much easier than more traditional designs.  With handgun practice and training, this is agreat aid.  Being able to spot your individual hits as they land helps confirm correct sight-picture. The different colored zones also come in handy on rapid-fire strings as you quickly identify
any ‘fliers’. 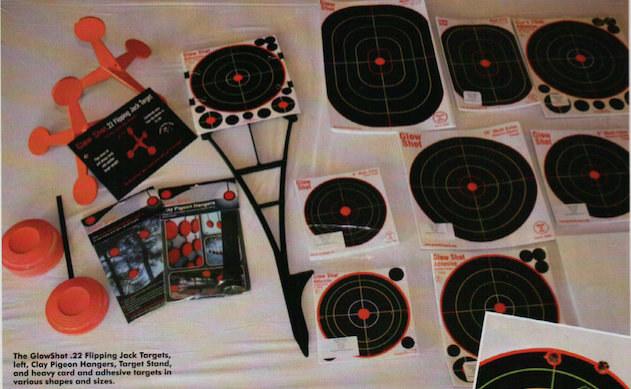 At ranges of 100m-plus, the coloured halo around each shot also makes it much easier to pick up in your optic or spotting scope. On many ranges. the changing light angles of the sun at different times of the day can make it hard to distinguish hits on targets at long range with all but the best of optics. GlowShot targets overcome this issue. The added vertical height of the oval-shaped targets can also assist in sighting rifles for longer distances, where you might purposely sight the point of impact high to take advantage of a maximum point-blank range.

GlowShot also produces tough stands and is ideal for use with all of their targets. It is made in Australia from 6mm steel to stand up to plenty of punishment. It is impervious to all pistol caliber and rimfire rounds with a minimum range of 25m and centre fire rifles less than 2900fpm at 100m or greater. It comes with a stiff target backer that will survive at least 500 hits, also easy to install, It’s steel leg plants firmly in the toughest of soil. 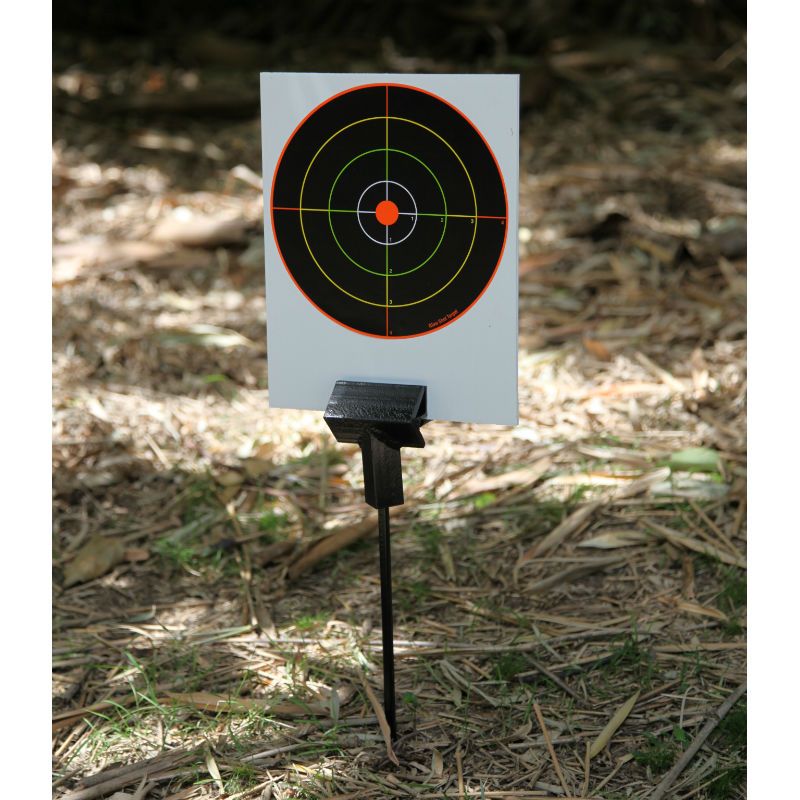 Next out of the bag were the GlowShot .22 Flipping Jack Targets. Made in Australia from tough high carbon steel, these targets are designed like a large caltrop, with a round target head on the end of each
spike. A caltrop is a device of four spikes are fabricated in a fashion so whichever way it hits the ground, one spike points directly up. In early days, they were used on the battlefield to hinder cavalry, while modern tyre spikes used by law enforcement agencies follow the same design. With the GlowShot Flipping Jacks, you simply shoot the top target head and the target flips over, 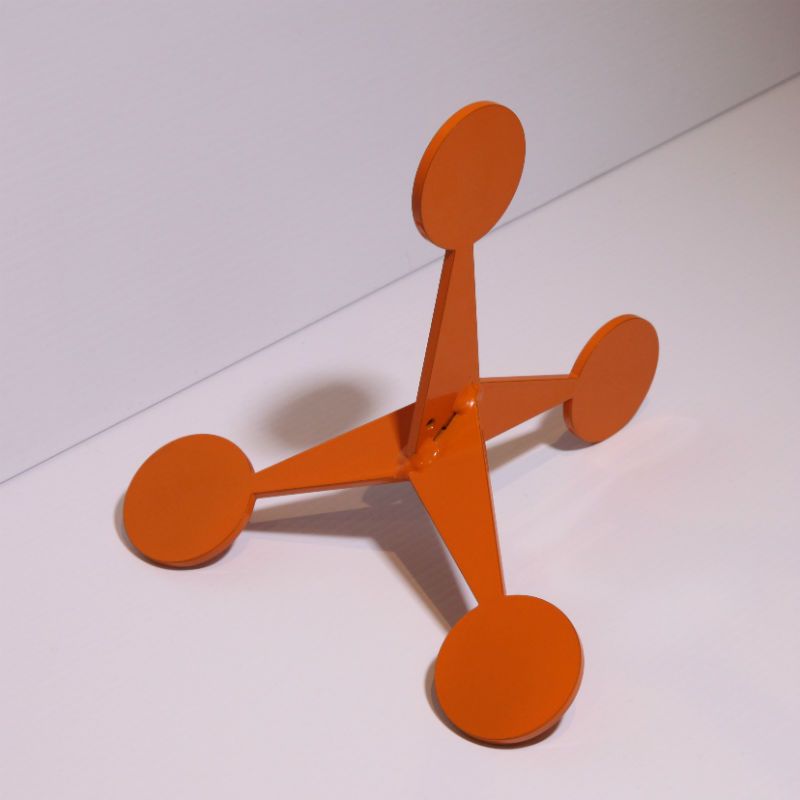 exposing one of the others. As with shooting any steel targets, safety must always be considered. Firstly, these targets are rated for use with standard-velocity .22 Long Rifle ammunition only. Secondly, a minimum stand-off distance of 25m should be respected for the shooter and anything else that might be averse to a little lead splatter. Naturally, a safe location and backdrop should be selected when setting up, and ear and eye protection is advised when shooting.

Getting the full experience, I set up the GlowShot Target Stand at 25m and dropped a Flipping Jack Target either side. Using a corner post as a rest, I checked the zero of the standard-velocity .22LR ammo in my old Brno Model 2. A correct strike on the Flipping Jack Target is rewarded with both the visual of the target flipping over and an audible report. Repeated hits have the target, in effect, ‘walking’ away from you. To add to the fun, these should be bought in pairs so you can challenge your friends to a race – who can roll their target the furthest in 10 rounds, for instance, or with unlimited rounds within a set time. It’s not only great fun, but can also build and hone real field-shooting skills. Another nifty target idea from GlowShot comes in the form of Clay Pigeon Hangers. Once upon a time, I held a AA grade in Trap shooting, and over the years, I’ve shot literally thousands of clay targets, but they were always thrown from a trap and shot with a shotgun. It was not until recently that I discovered clay targets also make cheap, static but reactive targets for both pistol and rifle shooting activities. 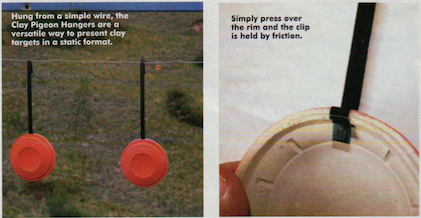 The GlowShot Clay Pigeon Hangers are as simple as they are ingenious. The hangers are strips of pliable metal. with one end that clips onto the rim of your standard clay target. Adjustments can be made for differing thicknesses of the target rim. The other end of the metal strip is bent and formed into whatever shape is required to hang in from the desired backing.

On my test range. I have an old swing set. which holds four steel reactive plates. The addition of a single wire strand across the top of the frame allowed me to hang six bright orange clay targets. utilising a single packet of Clay Pigeon Hangers.

At 110mm across. a standard-dimension clay target can offer quite a challenging offhand target at 100m when presented with your favourite hunting rifle. With safety and common sense observed. the options of where you could hang these portable reactive targets are almost endless. Better still. you can now buy modern clay targets that are environmentally friendly and will decompose. leaving nothing behind when the shooting is all done. 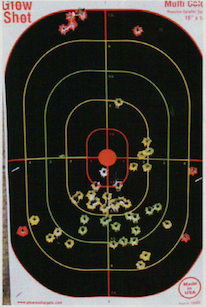 David at Glowshot is continually testing and developing new solutions for shooting targets, firearms and storage, so look out for more great ideas and target options.GlowShot targets are being stocked by an ever-increasing range of gunshops. Ask at yours or visit www.glowshottargets.com.au where you can see instructional videos and buy direct.

Want to Stock our Targets?